Many people have questioned the historicity of the biblical story of the Flood, arguing that such a worldwide event is incompatible with modern scientific views of natural history. However, there is a record of a colossal deluge in the collective cultural memories of many peoples far from each other, all over the world, and not only in the ancient Near East, Mesopotamia, Egypt, and Greece. Flood narratives are found in India, China, among the ancient habitants of Ireland, among the Maya peoples in Mesoamerica, Native Americans, ancient peoples of South America and Africa, and even among aboriginal tribes of Australia. The fact that modern science cannot make sense of the Flood phenomenon is not proof that this event never took place. Modern science’s failure to account for the Flood is simply another evidence of the limits of science, especially when dealing with something as supernatural as the Genesis flood.

This week, we shall not study the biblical story of this cosmic event in order to understand it from a scientific point of view. We do not possess all the data to be able to comprehend this phenomenon. Apart from the scientific discussion, a number of questions will be debated. The fundamental question concerns God Himself: What does this story teach us about the God of the Bible and His purpose? Gnostic philosopher Marcion of Sinope (ad 85–ad 160), and many other Christians after him, used the Flood to demonstrate that the God of the Old Testament was a violent and cruel God, set in diametric opposition to Jesus, the God of love.

The God of Justice

After the events of the Creation and the Fall, the disobedience of our first parents escalated until the world was filled with corruption and wickedness. From the time of Cain and Abel, humanity was divided into two camps. It is interesting that each genealogical line is defined on the basis of their relationship with God. While the genealogy of Cain (Gen. 4:17–22) is introduced by his rejection of God (Gen. 4:16), the genealogy of Seth (Gen. 5:1–32) is introduced by the image of God (Gen. 5:1). This contrast explains why the line of Cain is later identified as “the sons of men,” whereas the line of Seth is identified as “the sons of God” (Gen. 6:1, 2). No wonder God is worried when He observes that the two lines are getting mixed up, producing a new genealogical line that is in open rebellion against God. The phrase “took . . . for themselves” (Gen. 6:2, NKJV) suggests the intention of the “sons of God” to replace and counter God’s divine operation of marriage, as illustrated by the words “He took” the wife and brought her to Adam (Gen. 2:22). The “sons of God” want to take God’s place, an attitude that is reflected in the words “saw . . . that they were beautiful” (Gen. 6:2). In Hebrew, it is the same word tob, “good” (translated here “beautiful”) that is used, just as in God’s response to creation when He “saw that it was good” (Gen. 1:4, 10, 12, 18, 21, 25). This replacement of God leads the “sons of God” to commit acts that are no longer in keeping with God’s laws in Creation, but in line with their own sinful desires.

Meanwhile, the use of the plural “wives” suggests the introduction of polygamy, and the phrase “of all whom they chose” suggests wild and uncontrolled sexual activities outside of the divine Law. “Took . . . for themselves of all whom they chose” (Gen. 6:2, NKJV) has even the connotation of self-service, violence, and rape (see Gen. 39:14, 17). All these sexual acts were not just a repudiation of God but also abuse of women.

The biblical text reports that God saw the wickedness (Gen. 6:5). This is the second time that the biblical text reports God as the One who “sees” (compare Gen. 6:1–4). In parallel to the Creation account, the divine act of seeing immediately follows the divine word: “The Lord said . . .” (Gen. 6:3). “Then the Lord saw . . . the wickedness of man was great” (Gen. 6:5, NKJV). This line is a second echo to the refrain of Creation, “And God saw . . . that it was good” (Gen. 1:4). But here the original “good” (tob) of God’s creation has been replaced by what is contrary to it: wickedness (ra‘ah). God’s next comment is a tragic evaluation of the situation. The “great wickedness” does not refer just to some specific actions or occasional evil deeds; it describes a thorough and definitive condition, and concerns the root, the profound motivations, of the human heart wherein God finds radical evil. Humanity has reached the point of no return. God must intervene with a worldwide flood to preserve a remnant of the human race from complete moral degradation and thus extinction.

The God of Love

In this divine intervention, the language evokes Creation. God regrets that He created humanity. The divine “regret” is associated with the divine sadness. God “was grieved in His heart” (Gen. 6:6, NKJV). The Hebrew verb ‘atsab, “grieve,” is the opposite of joy (Neh. 8:10) and refers to mental pain (Gen. 3:16). God’s emotion has to do with His love for humans. Significantly, the Hebrew verb nakham, translated “sorry” (Gen. 6:6, NKJV), contains the positive nuance of “grace” and “love.” Hence, the translation “sorry” for the Hebrew word nakham does not fully account for God’s sentiments. The divine “regret” does not mean that God has changed His mind; instead, it contains elements of grace and “comfort.” Thus, the word nakham appears sometimes in parallel with the word shub, “repent” (Jer. 4:28, Jon. 3:9).

The use of the word nakham brings hope into the picture—the prospect of salvation through the Flood. God’s emotion reveals His love for humans. Nevertheless, God expresses His love through His judgment. God’s response to wickedness through destruction is an act of love. The Hebrew word makhah, “destroy,” is presented in a wordplay with the preceding word nakham (“sorry,” “comfort”), which evokes God’s sadness and compassion toward humanity through Noah. While nakham suggests the positive face of judgment, makhah reveals its negative face. Furthermore, the word makhah belongs to the language of judgment. It means, more precisely, to “erase.” This “erasing” means a physical destruction that operates in reversal of Creation, undoing God’s creative acts. But beyond the physical destruction, this act of judgment also refers to being spiritually erased from the book of life (Exod. 32:32, 33; Ps. 69:28, 29). In biblical thinking, love and justice belong together (Mic. 6:8).

The God of Wisdom

The combination of love and justice is precisely what makes God’s wisdom what it is. God does not just save through His good will and love. The details of the building of the ark (Gen. 6:14–22), which would allow Noah and his family to survive the Flood, are tangible evidence of God’s serious attention to the reality of life. These minute architectural details not only testify to the historical reality of the ark’s construction; they reveal the divine concern for the success of the operation. God gave precise instructions for that purpose. The resinous wood of the tree, used to build the frame of the ark, and its sap were designed to make the ark watertight inside and out. A window was provided at the top of the ark to make a passage for light and air, situated within a cubit of the edge of the roof. It was probably some kind of lattice constructed along the line of the roof, bringing in light in such a way that the different apartments within the ark were lighted and ventilated.

The God who cared for the construction of the ark is the same God who later will give detailed instructions for religious life and spiritual salvation through the sacrifices of the sanctuary service. In fact, there are many parallels between the blueprints given for the ark and the tabernacle. The dimensions of the ark (Gen. 6:15) are given according to the same standard and with the same words used for the construction of the ark in the tabernacle (Exod. 25:10).

How big was the ark? If the cubit equaled 18 inches, or 45 centimeters, 300 cubits for the length of the ark would have equaled 450 feet, or more than 137 meters; 50 cubits for its width would have equaled 75 feet, or 22 meters; and 30 cubits for its height would have equaled 45 feet, or 13 meters. These measurements have no special symbolic or spiritual significance; they simply suggest the magnitude of the size of the vessel, which was large enough to accommodate the animals and humans on board. But the many parallels between the ark and the tabernacle carry a profound meaning: the God who saves spiritually, Jesus Christ, is the same Creator God who saves us physically and materially.

Discussion and Thought Question: How do the three dimensions of God—justice, love, and wisdom—relate to each other theologically?

Thou Shalt Not Kill. The essential lesson of the Flood is the affirmation of life. After the destruction of His creation and the death of all humans outside the ark, God says yes to life. In that context, God enjoins humans not only to multiply but also not to take life, for life is sacred. This principle applies first to animals. So, God’s toleration for some consumption of meat, considering the post-Flood situation, is qualified by the commandment not to eat flesh with the blood, because the blood represents life (Gen. 9:4). But for humans, God’s application is absolute. Because God created humans in His image, their blood should not be shed (Gen. 9:5, 6). Although the lives of animals are sacred, as indicated in the blood proscription, it is significant that only human life requires an accounting before God (Gen. 9:5).

The Hebrew language has several verbs for killing. All these verbs apply to both humans and animals except one, the verb ratsakh, which applies only to humans. Significantly, it is the verb ratsakh, “kill” (KJV, ASV), “murder” (NIV, ESV), that is used in the Ten Commandments (Exod. 20:13). The nuance of this usage does not differentiate between the case of murder and other cases, but between the object that is killed—humans or animals. Therefore, the sixth commandment should not be translated as “you shall not murder,” implying only the specific case of a criminal act, but “you shall not kill humans” in the absolute sense.

Thought Question: How do you apply this principle to the situation of military service or the question of capital punishment? 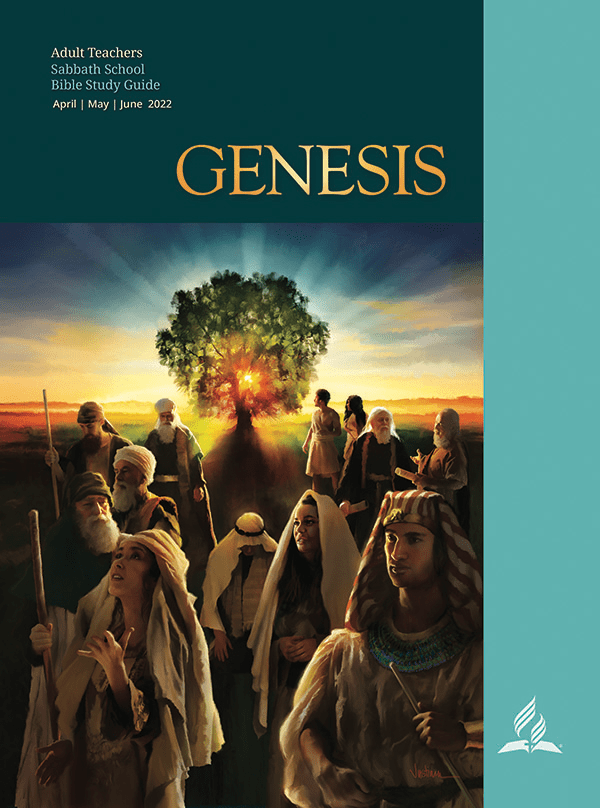 Preparation for the Flood

The Event of the Flood

The End of the Flood